The slogan for the Michigan State Parks Centennial is "Look Back, Give Forward." Michigan residents are encouraged to make a $100 donation to the state parks for 100 years of service. 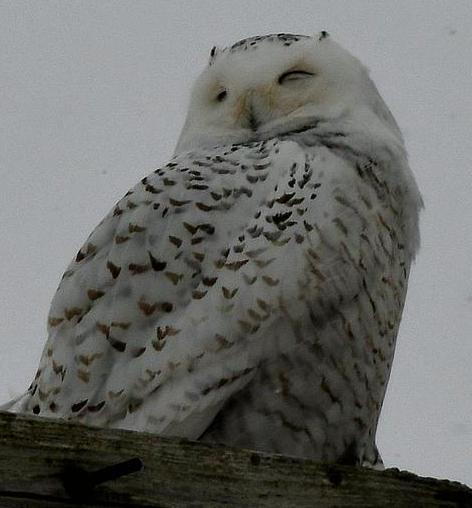 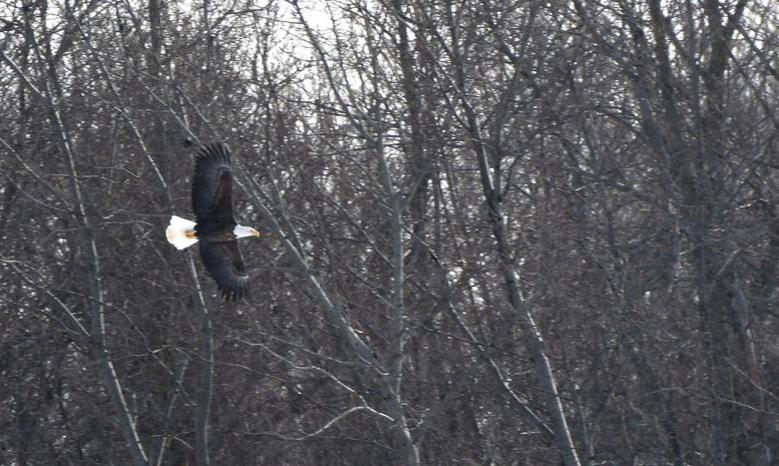 A bald eagle photographed at long range at the Venrona State Game Area - Day 4 of the GBBC. 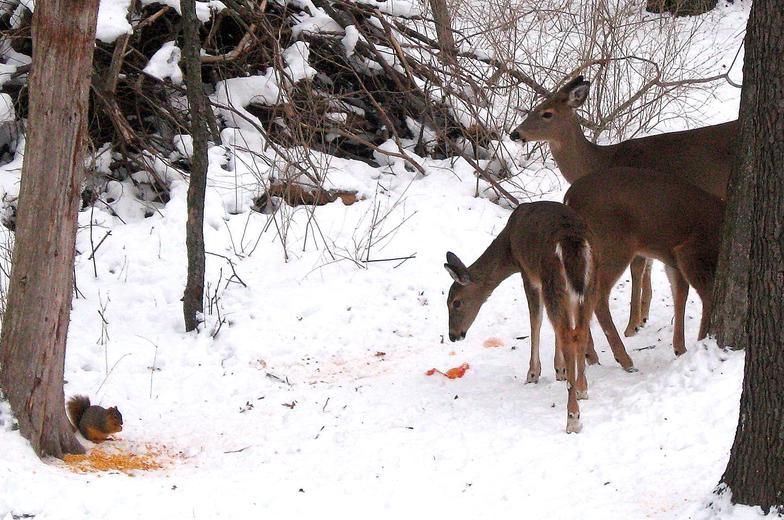 Feeding deer for recreational viewing or close-up photos is no longer legal in the Lower Peninsula.
A deer baiting ban is now in effect in Michigan’s Lower Peninsula.   After January 31, 2019, it became illegal to bait or feed deer for hunting or recreational viewing.   The Natural Resources Commission approved the measure in August 2018, in an attempt to stop the spread of Chronic Wasting Disease (CWD), a contagious, neurological disorder affecting white-tailed deer and other cervids like elk and moose.
According to the Department of Natural Resources (DNR), “CWD is fatal; once an animal is infected, there is no cure or recovery.”  As the disease progresses, it causes “…a degeneration of the brain resulting in emaciation…, abnormal behavior, loss of bodily functions and death."
A whitetail in the final stages of CWD is sometimes called a “zombie deer” because
the severely emaciated animal, head down and drooling, wanders about aimlessly
with a blank stare in its eyes.  Loss of energy, poor balance, drooping ears, and more aggressive behavior are other signs of the fatal brain infection.
The DNR website states that CWD is spread “…through direct animal to animal contact or by contact with saliva, urine, feces, blood, carcass parts of an infected animal or infected soil.”  In Michigan, the disease was first discovered in free-ranging deer in May 2015.   Since then, about 60 cases have been confirmed in six Lower Peninsula counties: Clinton, Ingham, Ionia, Jackson, Kent, and Montcalm.
The DNR is desperate to stop the spread of this disease because potentially it could destroy the state’s deer herd and its deer hunting traditions.  In neighboring Wisconsin, over 900 cases of CWD were reported last year, and the disease has become endemic in the South Farmland Zone.  It is against this backdrop that the
DNR has ordered a ban on baiting and feeding deer in the Lower Peninsula.
The ban on feeding deer not only affects hunters, but also those who feed birds and other wildlife.   According to the DNR website, you can only feed birds “…if done in such a manner as to exclude wild, free-ranging white-tailed deer…from gaining access to the feed. If a deer can eat the feed, that would be considered feeding deer and could be illegal depending on the area you are in.”
The DNR encourages the use of “…tube, hopper and suet bird feeders rather than putting seed directly on the ground or using platform feeders, which tend to attract deer and other unwanted guests.”   They also mention a radical solution for the problem: “You can also prevent deer access to your feeders by fencing around your feeders, if possible.”
The DNR is serious about stopping the spread of CWD in the state, and their website appeals to all Michigan residents to join them in this effort:
“WE NEED YOU!  Chronic Wasting Disease has now been found in both the Upper and Lower peninsulas of Michigan.   We need your help to control the spread by being responsible stewards of the land, following current regulations and keeping up with the latest news. YOUR ACTIONS MATTER.”
The ban on baiting and feeding deer in the Lower Peninsula will have wide-ranging consequences.  Without bait piles, whitetails will return to their natural feeding patterns, and it will be harder for hunters to fill their tags.  Fewer deer harvested could result in less interest and more hunters abandoning the sport.  Deer hunting is already declining in Michigan, and some believe that the new ban is likely to further that trend.
However, the fact that the DNR is willing to take what can only be considered “drastic action” demonstrates how serious the problem is and how determined they are to stop CWD from ruining Michigan’s deer herd and its hunting traditions.
J.H.McCoy
Notes: The DNR website addresses several CWD issues in the “Questions and Answers” section, including the following responses:
[1.] “CWD on the landscape could significantly reduce the number of deer and/or depress older age classes, especially mature bucks…. Michigan has about 600,000 deer hunters who harvest about 430,000 deer annually.   Hunting generates more than $2.3 billion annually to Michigan’s economy.  Without management of CWD, disease may spread across the state.”
[2.] “Mineral blocks/licks ARE considered bait.”
[3.] “Food plots are considered an agricultural practice and separate from baiting. They are legal throughout Michigan.”
[4.] “Infected animals may not show any symptoms of disease for a long period of time, even years.   The later stages of the disease in infected animals include loss of body condition, change in behavior such as a loss of fear of humans, loss of bodily control or movements, and excessive drooling.”
[5.] “It is not recommended to eat the meat from known CWD infected animals….”
[6.] “[In the Upper Peninsula] A 4-year-old doe has tested positive for chronic wasting disease.  The deer was killed in Dickinson County’s Waucedah Township on a deer-damage shooting permit in September 2018 on an agricultural farm, about 4 miles from the Michigan-Wisconsin border.   This event marks the first confirmation of chronic wasting disease in the Upper Peninsula.”
NB: During the Liberty and Independence hunts, there is an exception to the baiting ban for disabled veterans and hunters with disabilities.
[Visit the DNR website for more information: www.mich.gov/cwd ] 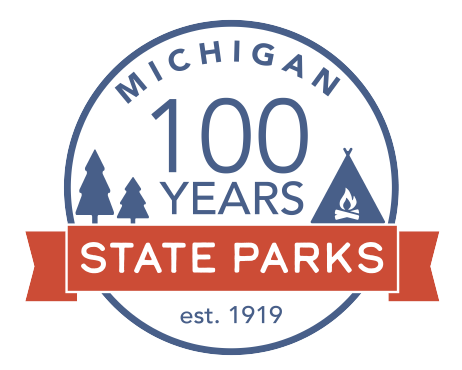 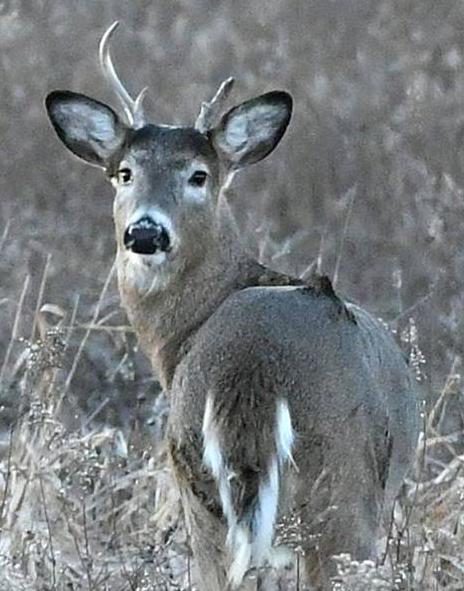 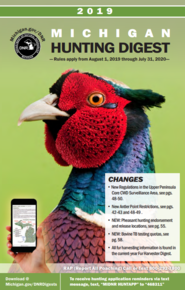 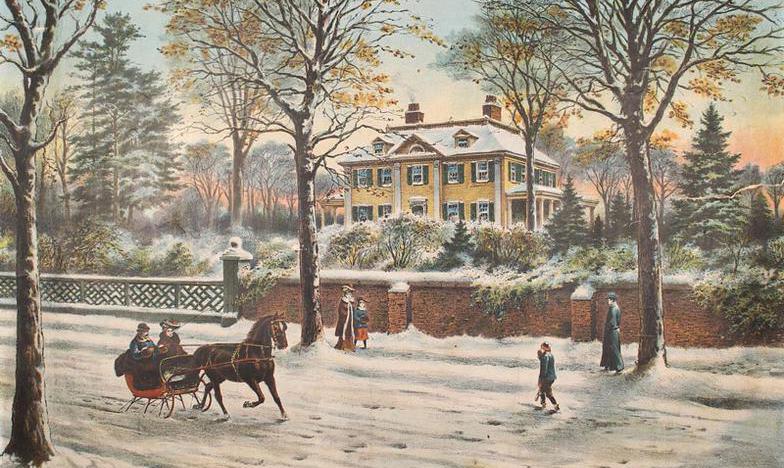 A winter scene in front of Henry Wadsworth Longfellow's house in Cambridge, Massachusetts.  It was here that he wrote "Christmas Bells" (1863) and other famous poems while teaching at nearby Harvard College.
IN SEARCH OF THE SNOWY OWL
from THE MINDEN CITY HERALD (1/9/20) 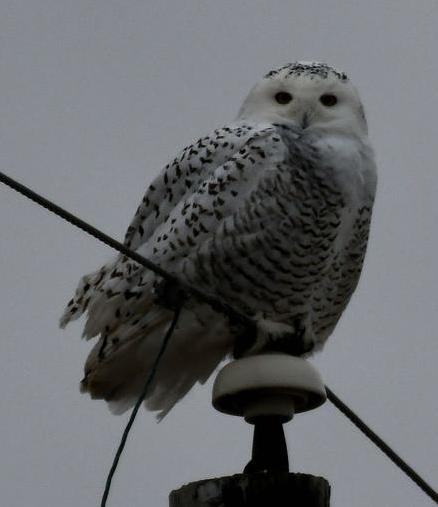 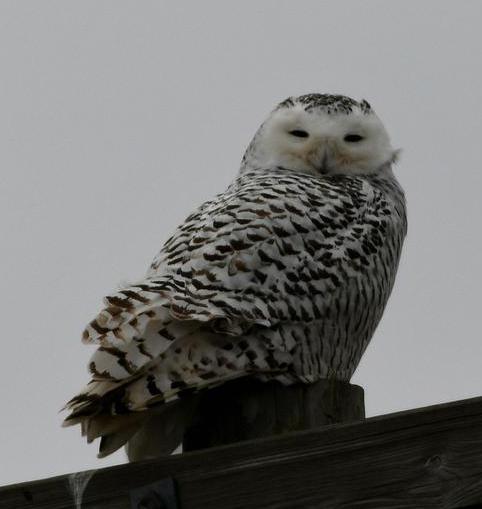 Snowy Owl #1 (left) and Snowy Owl #2 (right).  Both have heavy dark markings and look like juvenile birds.  A female snowy owl also has dark streaks and spots, but not as heavy and pronounced
Last Friday about noon, I saw my first snowy owl of 2020.   The large white Arctic visitor to the Thumb was perched on a power pole along a country road northwest of Harbor Beach.   At the time, I was not looking for owls or expecting to see one.  I knew that snowy owls had been reported in the area earlier in the winter, but I had not seen one yet.
As I drove along, I watched the power poles in the distance, something I do at this time of the year, perhaps unconsciously.  About a quarter mile ahead, I noticed an out-of-place white object
at the top of one of them: it was my first snowy owl of the year.
I wanted to get a picture of the owl, but it was on the passenger side of the car.  Because of the upward angle, it would have been difficult to photograph the owl without getting out of the vehicle and possibly spooking it.  So I drove by as if I did not see it.   At the next intersection, I turned around and came back with my telephoto lens sticking out of the car window.
As a general rule, snowy owls are quite tame and usually ignore human activity.   Their existence in the far North makes them unacquainted with the dangers that men can pose, and they are usually more curious than afraid.
Needless to say, snowy owls are completely protected and cannot be harmed or harassed in any way.  Even a close approach by curious onlookers is discouraged by some wildlife experts.  They believe that invading an owl’s space could put stress on a bird, which might already be weakened by cold, hunger, or parasites.   Making an owl fly repeatedly causes it to waste precious energy and could put its survival at risk.
I took several pictures of the snowy owl at long range, just in case; and then I drove up closer to the power pole and snapped a few more.   The owl seemed unconcerned; it ignored me and kept swiveling its head around, surveying the winter landscape.  Occasionally it looked down at what
it must have considered a rather strange object.   My first snowy owl of 2020 was still sitting on the power pole as I drove away.
The next afternoon, I wondered if I could find a snowy owl in the area if I actually went out looking for one.  About 3:00 P.M., I left the house and began my search.
I drove some of my favorite “snowy owl roads” and checked the tops of power poles along the way: Helena Road, Ruth Road, and Parisville Road.  I also scanned some of the bare brown fields along the highways, looking for an out-of-place white object.
I drove over thirty miles and saw nothing.   As it started to get dark, I headed home.  Since I was several miles west of Parisville, I decided to take a gravel road through the Verona State Game Area on my way back north.   I considered my “search for the snowy owl” officially over.
But then I saw another one!
It was perched on a transistor at the top of a power pole, close to the road and right out in the open.  Again, the owl was on the passenger side of the car, and so I followed the same procedure as before.
Each owl has its own personality, and this one seemed very distant and aloof.   It totally ignored me, even when I drove the car up close to the pole.   It kept its yellow eyes focused on the surrounding fields and only occasionally glanced in my direction.   Eventually, the owl looked down for a few seconds, and I got the pictures I wanted.
As I drove away, I could see the owl in the rearview mirror, still sitting high up on the pole. Suddenly the title for this article popped into my head: “In Search of the Snowy Owl.”
I realized, however, that technically my “search” was a failure.   I came up empty on all the
“snowy owl roads” I had driven earlier in the afternoon.   Turning down this particular road and locating a second snowy owl was pure serendipity, proof positive that these Arctic visitors to
the Thumb are “where you find them.”
J.H.McCoy
Notes: I posted the picture of my first snowy owl on Facebook and got several comments, including one from a serious birder about a sighting just east of Minden City:
“Check out the Ruth Rd./Bay City-Forestville Rd. area. I had one there last Sunday
(December 29, 2019).”
Both snowy owls that I saw last week were heavily streaked with black markings.  According to the National Geographic Field Guide to the Birds of North America, “Dark bars and spots are heavier on females, heaviest on immatures; old males may be pure white.”
Many people say that they have never seen a snowy owl.  Chances are they have driven by one without noticing it.  If you want to see a snowy owl, glance at the tops of power poles as you
drive along.  Also watch for out-of-place white objects in the fields near the road. Sooner or later, you will see one.
Here is some proof that if you are looking for snowy owls, you will find them:
On December 17, 2019, birders participating in the Huron County Christmas Bird Count recorded two snowy owls during their annual bird census.   More recently, Tuscola County birders topped that number and tallied an amazing twelve snowy owls on January 4, 2020, during the Tuscola County Christmas Bird Count.