Welcome to SCHOCK MCCOY PRODUCTIONS by J.H. McCoy.  This website is named in honor of my mother,
Gloria (Schock) McCoy, and dedicated to her memory.  Since it was founded in 2015, her JOURNAL and ALBUM have always been prominent features, but now some of her recipes have been added to the website (RECIPES).
The HOMEPAGE is "seasonal" and changes during the year when the seasons do.  It contains some of my articles from my hometown newspaper.  The NEWS section features recent photographs and comments on the local scene.
PHOTO-ESSAYS is a record of my trips to iconic locations in the U.S.  A short history of the Schock family, written over 50 years ago (1970) by my great-uncle,  Edward D. Schock, is presented in HISTORY.  I edited it in 2020.
I hope that you will always find something interesting on this website and that you will tell others about it.
Thank you for stopping by.  Please sign the Guest Book, and come back soon!
J.H. (John Herbert) McCoy
9636 Roberts Rd., Harbor Beach, MI 48441 // [email protected] // (989) 551-9487 (cell)
FOUNDED
JANUARY 30, 2015
1

SAND BEACH TOWNSHIP
&
MICHIGAN'S THUMB
J.H. MCCOY
+++WINTER 2022-2023+++
​"Thank goodness for the first snow, it was a reminder -- no matter how old you became and how much you'd seen, things could still be new if you were willing to believe  they still mattered."
Candace Bushnell (1958)
1

"THE SCHOCK FAMILY TREE" by Edward D. Schock (1970) edited by J.H.McCoy
Read it in HISTORY
"No winter lasts forever;
no spring skips its turn."
Hal Borland (1900-1978)
NORTHERN SHRIKE
ARTICLE BELOW
MY ARTICLES/PHOTOS FROM THE MINDEN CITY HERALD
REST IN
PEACE
CLICK
ON
PIC
"If we had no winter, the spring would not be so pleasant: if we did not sometimes taste of adversity, prosperity would not be so welcome."
Anne Bradstreet (1612-1672)
NORTHERN SHRIKE....THE BUTCHER BIRD
from The Minden City Herald, JANUARY 29, 2015
Usually silent in the winter, the northern shrike is a predatory songbird about the size of a robin.  From a distance, the black-masked visitor from the far north looks like any other common backyard songster, but appearances can be deceptive.   This hook-beaked predator is actually a finely tuned killing machine, a deadly hunter which preys on mice, voles, amphibians, large insects, and even other birds.  Its Latin name is “Lanius excubitor,” the “butcher watchman,” but people who know birds are more familiar with its ominous nickname – “butcher bird!”
Since northern shrikes belong to the songbird family, their feet are not designed for killing and dismembering prey.  They do not have talons, like hawks, owls, and other raptors; and so they kill their victims with lethal bites to the back of the neck.  Then they impale them on a thorn, sharp twig, or barbed wire with the head up, much as a butcher hangs meat.  After that, shrikes can tear their prey into bite-sized pieces  using their powerful hooked beak. Sometimes they wedge their kill into the crotch of
a small tree or shrub to get the leverage needed to “butcher” it.
This predator-songbird is wholly carnivorous and will often keep hunting even after making a kill.  The northern shrike stashes prey in trees, shrubs, and bushes around its hunting territory to provide a food cache for leaner times.  Because of this practice, they have been accused of “wanton killing,” but storing food is a survival strategy used by many birds, including blue jays, black-capped chickadees, and nuthatches.
The northern shrike nests on the edge of the tundra and in open areas of the taiga.
In the summer, two-thirds of its diet consists of large insects, like grasshoppers, crickets, beetles, caterpillars, and bumblebees.   But in the winter when other prey becomes unavailable, this fearsome hunter turns almost exclusively to mice and songbirds, a practical necessity as it migrates from the frozen north and travels
south in search of food.
Last year, I intended to write a story about the northern shrike and hoped to get a suitable picture, but since they are sporadic and irregular winter visitors to the
Thumb, I never had the opportunity.  Occasionally, however, I did see one flying
across a field. Their low, undulating flight and habit of swooping up to a perch at
the top of a tall tree or shrub is characteristic.  Their dark wings with white patches
on the top and bottom provide a contrast to their overall gray look. Their longish
black tails are narrowly outlined in white. The northern shrike scans the ground
from a high perch with its tail held nearly horizontal to its body. Sometimes the solitary hunter hovers in place before dropping down and pouncing on its prey.
In 2015, I was again looking for the “winter shrike.”  By sheer luck, I spotted one on a blustery January afternoon, sitting on a power line next to the road.  The shrike was facing into the wind and intently watching the grassy field below.   I stopped the car well back, expecting the bird to fly off.   Instead, it ignored me and continued hunting.  I moved up slowly and eventually parked right across the road from the gray-colored “watchman.”
The shrike seemed to be doing a high-wire act as the strong wind whipped the line back and forth.  Using its rather long tail for balance, it struggled to stay upright as
the wind ruffled its feathers.   Whenever the shrike changed positions along the power line, I followed slowly in the car.  Unsuspicious and seemingly unafraid, the shrike
was not concerned about my close approach. Maybe it was distracted by the raw and gusty wind, or maybe this “butcher bird” simply wanted to have its story told!
Struggling to keep its balance, the shrike seemed unconcerned about the elements and continued patiently checking the ground from its swaying vantage point. Eventually, it caught a glimpse of something in the ditch near the road and dived  down from the wire. The shrike was out of sight for a short time, and when it emerged, it was carrying a vole or field mouse with its feet.  The shrike flew along the ditch to a nearby shrub where it impaled its lifeless victim on a sharp twig.  Then it returned to its perch on the wire and continued hunting.
The shrike did not come back to the shrub to make a meal of the unlucky field mouse. Maybe it was leery because I got out of my car and took some pictures, or maybe it was just doing what shrikes do - stocking the larder for leaner times.
Strange as it may seem, this wildlife drama played out right next to a paved road.
Cars passed by without the drivers noticing. The northern shrike continued its high-wire act, and the impaled vole hung in the shrub with its feet and tail dangling in the wind.  Every day and night, countless life-and-death struggles take place on nature’s battlefield, unnoticed and unseen by people hurrying by.
J.H.McCoy
Notes: There are two species of shrikes in the U.S., the northern shrike and the loggerhead shrike.  The loggerhead lives and nests in the Southeast and West.  It is rarely seen in Michigan, even in the summer.
The impaled field mouse was still hanging in the shrub at dark. However, later the next morning, it was gone.  And so was the shrike!
The northern shrike, aka "butcher bird" or "winter shrike."

Four rooster pheasants braved the strong winds and frigid temperatures last week as they searched for seeds and grain in a tilled wheat stubble field on Finkle Rd.  Evidently, they were hungry because they were feeding out in the open in the middle of the day.   Without cover and close to a road, pheasants are especially vulnerable.  They could fall victim to a passing hawk or to a scofflaw who would shoot them out the car window.
Yes, strange as it may seem, pheasant season is open in December.   The DNR claims that shooting excess roosters will not hurt the pheasant population.   But
it certainly “hurts” the ones that are shot. Those roosters definitely won’t make it through the winter.
And winter is a dangerous time for pheasants.   They must endure snow and freezing temperatures, lack of cover, scarcity of food, the onslaught of predators, and now according to the DNR, hunters’ guns as well.
In days gone by, there was a basic respect for this beautiful and celebrated game bird.  The traditional pheasant season ran from October 20 to November 10.  On the first day, hunters were not allowed in the field before 10 o’clock.  This gave
the birds a chance to feed and get back into cover. It seemed like the sporting thing to do.
Then the DNR abandoned the traditional dates and lengthened the season to November 14. Hunting began on October 20 at dawn.   December hunts were held in select areas.   Today, pheasants can be hunted in December throughout most of Zone 3.  And all this in the face of a dwindling, almost non-existent pheasant population.
However, rooster pheasants are tough, and in spite of dangers, obstacles and the DNR, many will survive the winter – that is, if they “…make it through December.”
"If We Make It Through December"
DECEMBER 19, 2013
"HE WAS A MAN, TAKE HIM FOR ALL IN ALL  --  I SHALL NOT LOOK ON HIS LIKE AGAIN."  -  HAMLET
IN MEMORIAM
Click to enlarge.
Click to enlarge.
"REMEMBERING MONICA"
A TRIBUTE IN "NEWS"
"He who marvels at the beauty of the world in summer will find equal cause for wonder and admiration in the winter."
John Burroughs (1837-1921)

JOHN MUIR (NATIONAL PARK SERVICE VIDEO)  "A GLORIOUS JOURNEY" - 22 MINUTES
The first day of pheasant season used to be a red-letter day in Minden City.   The town bustled with excitement as hunters got ready for the opener.  The two local hotels rented every available room, and townspeople boarded their friends and relatives who were hunting in the area.
Pheasant season opened at 10 a.m. on October 20, and for many Michigan sportsmen in the 1940s, 1950s, and 1960s, that date was bigger than November 15, the traditional first day of the firearm deer season.
When I was twelve years old, I thought the first day of pheasant season was the most exciting day of the year.   From the time I was in seventh grade, I was never in school on October 20!
Now, it’s just another day, and the opener will pass with little fanfare.  Few if any “city hunters” will be seen on the streets of Minden City.  One of the hotels where they stayed in the old days has been demolished, and the other one is closed.  The pheasants are gone, and a colorful era in the town’s history is over.
J.H.McCoy
Note: If you want to get some idea of what the first day of pheasant season was like in the past, drive through the Verona State Game Area (Huron County) on October 20.  Die-hard pheasant hunters will be combing the fields with their dogs, hoping to bag their limit of two roosters. 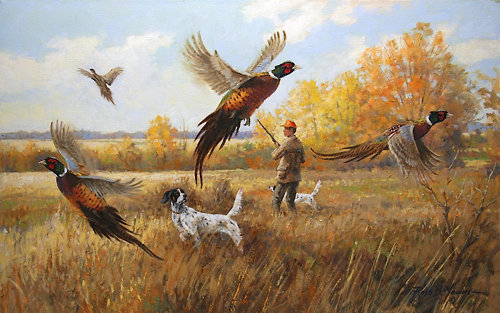 PHEASANT SEASON NOSTALGIA IN MINDEN CITY
I no longer hunt... because of age and because of a change in philosophy.  But when I was growing up in Minden City during the 1950s, I loved pheasant hunting and everything connected with it.  Pheasant season only lasted 22 days (October 20 - November 10, with no Sunday hunting), but it was the greatest time of the year for me.  While I was a student at Sts. Peter and Paul School in Ruth, I hunted pheasants annually for five years before going off to college and studying overseas.
It was eight years before I returned to the field in the late 1960s.  By then,  pheasant hunting in the Thumb had begun a slow, steady decline.   However, my boyhood memories remain .  A flying rooster pheasant will be on my tombstone...a  reminder of those golden years, "when the pheasant was king."    JHM 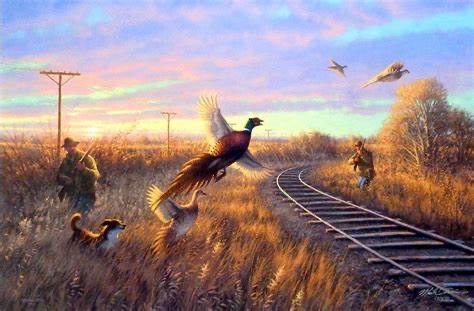 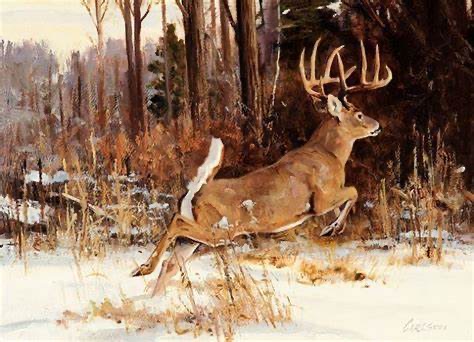 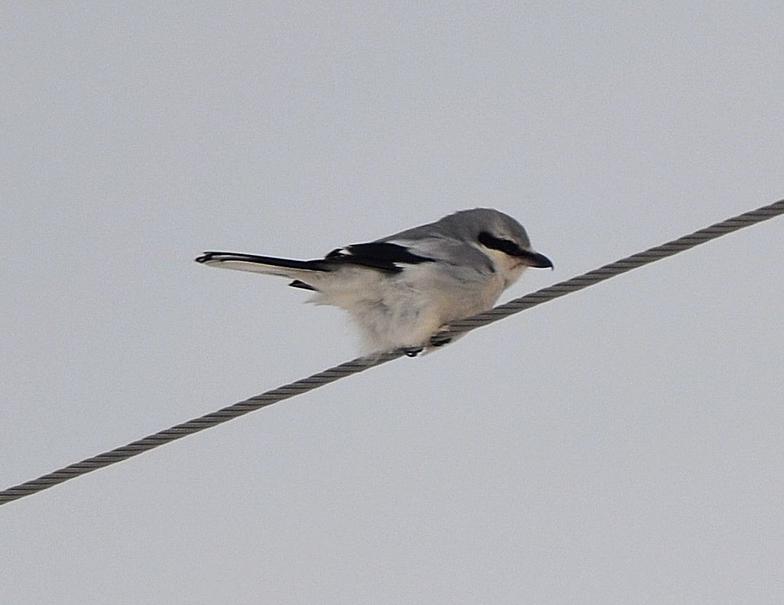 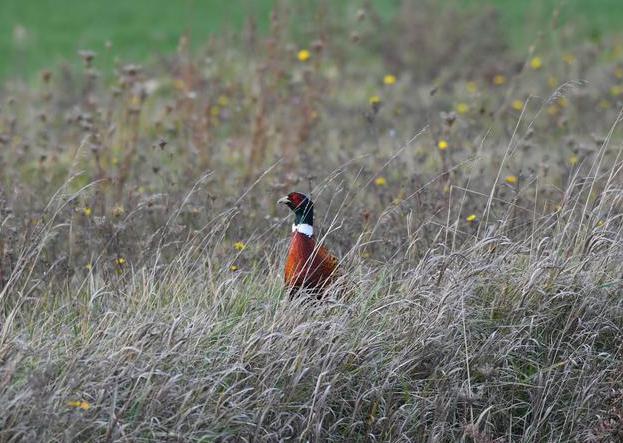 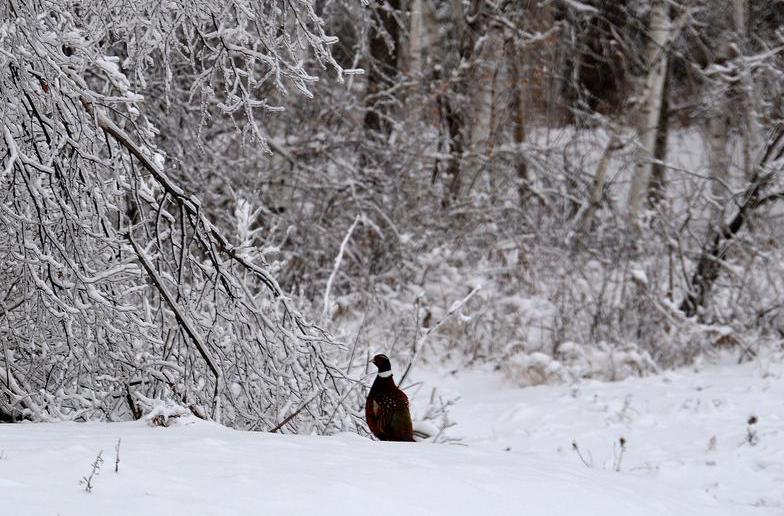 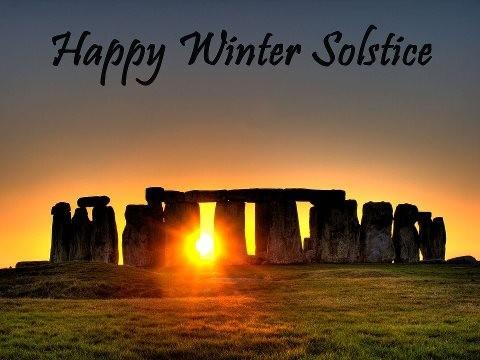 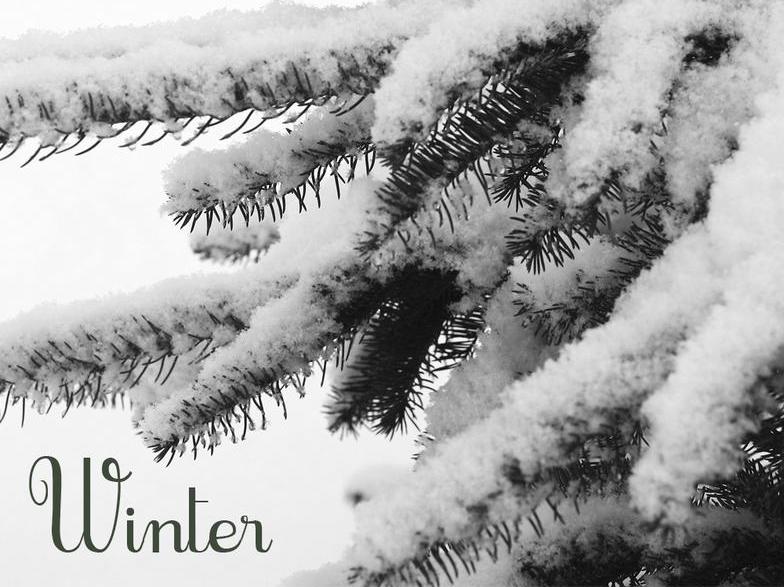 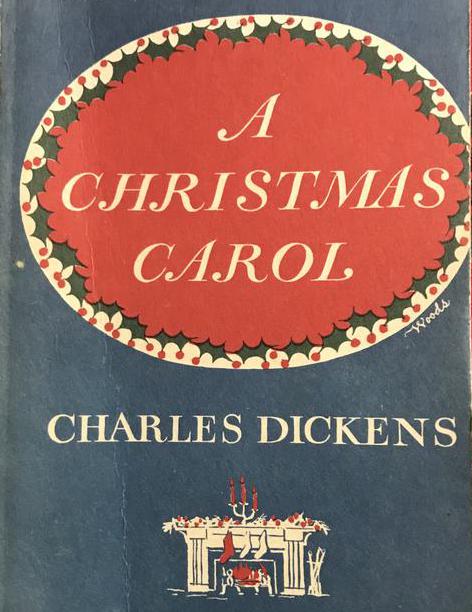 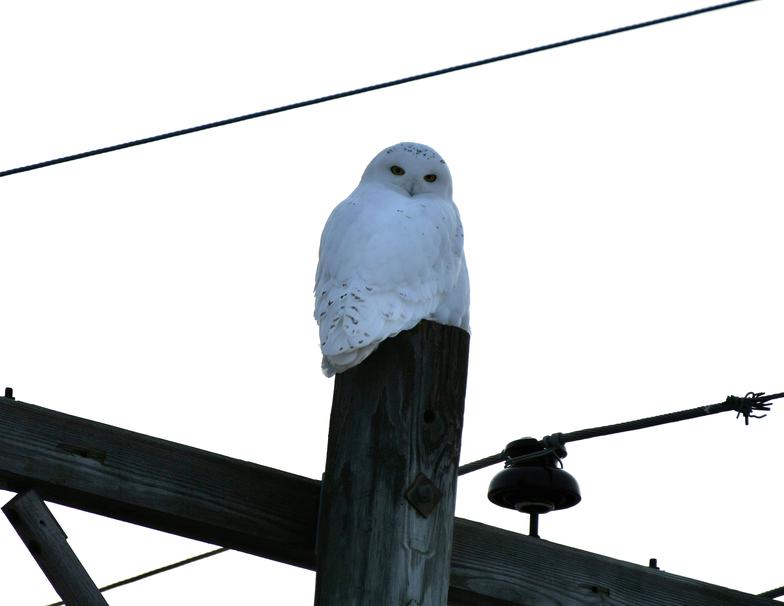 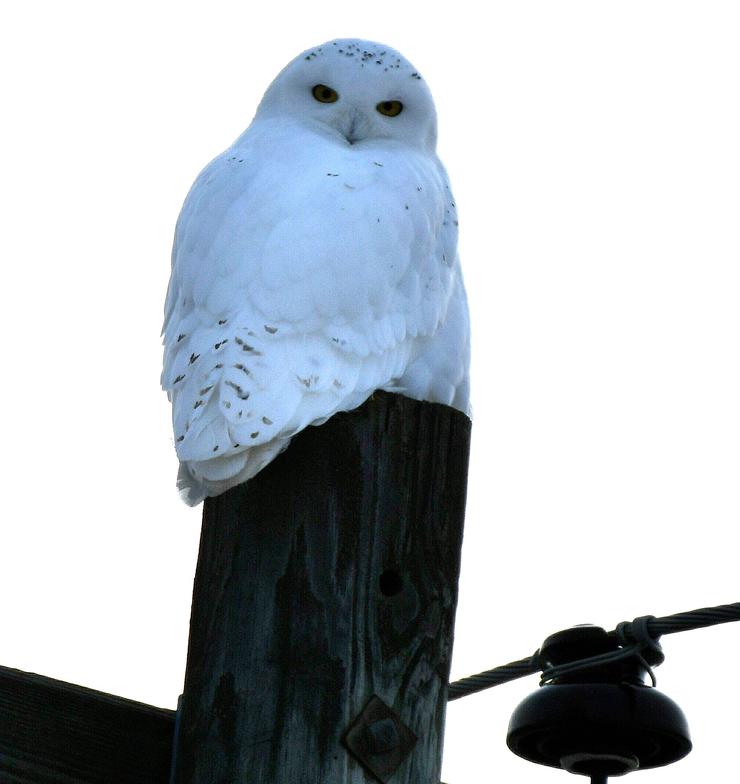 HUNDREDS OF NOISY TUNDRA SWANS, ADULTS AND JUVENILES, STRUNG OUT ALONG THE SHORE IN MY SUBDIVISION, EXTENDING SOUTH TO ROCK FALLS CEMETERY
**CHRISTMAS ESSAY
SCROLL DOWN 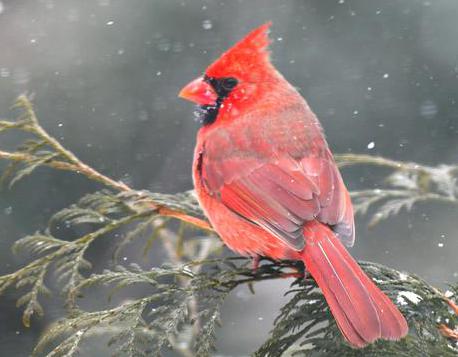